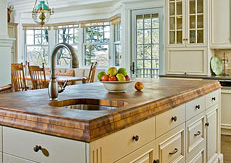 Grothouse was featured on This Old House. Grothouse was chosen to craft a custom butcher block island for the kitchen and a Custom stain-matched dining table for the 1897 Shingle style home in Newton, Massachusetts renovated on the Emmy Award-winning PBS televisions series This Old House. This Old House master carpenter Norm Abram’s tour of The Grothouse production facility was featured in one episode, while a separate episode showed owner Paul Grothouse installing the butcher block and custom table in the home with the host of the show, Kevin O’Connor.